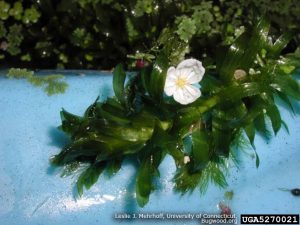 Brazilian waterweed, also known as Brazilian elodea, is a submerged aquatic perennial plant that infests streams, lakes, and ponds. The bright green stems are generally 1-2 feet in length, but can be as much as 20 feet. The plant’s leaves are arranged in whorls of 4 to 6 leaves; the leaves are generally 0.5 to 1.5 inches in length, and have minute, fine teeth along the margin (you need a hand lens to see the teeth). The flowers are bright white, 3-petalled, and elevated on a pedicel about 1 inch above the water.

Male and female flowers occur on different individuals. This South American plant does not reproduce sexually in North America; it spreads from nodes on the stem. When the stem breaks (which it does easily), these nodes form branches that develop into new plants.

Hydrilla (Hydrilla verticillata), another invasive aquatic species, looks like Brazilian waterweed. The most obvious difference is that hydrilla has small tubers at the base of each stem (Brazilian waterweed lacks tubers). 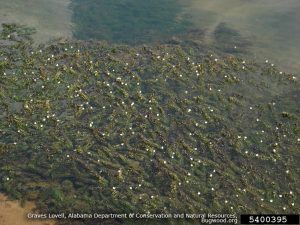 Brazilian waterweed can form dense mats which crowd out native aquatic plants and degrade habitats. It can interfere with recreational activities such as boating, fishing, and swimming.

Brazilian waterweed is invasive in much of the United States. The species is commonly used as an “oxygenator” in aquarium tanks, and invasions are often the result of aquarium material dumped into rivers and lakes. The plant has been documented in Connecticut and Vermont as well as Massachusetts, where it has been reported in Essex, Middlesex, Norfolk, and Plymouth Counties.