Invasive species are any plant or animal that is not native to an area, and that is able to reproduce without any natural checks on population growth. These species begin to fill the ecological roles of native species, but do not have to contend with predators, disease, and other limiting factors that the natives do, and in short order can entirely replace native species.

Plants and animals have been moved around the world, intentionally and unintentionally, since humans started traveling. When organisms are moved to a new location, if climate and other factors are similar to their home, they can thrive. Suddenly away from natural predators and the local diseases and pests that they evolved alongside, many species proliferate.

Massachusetts is no stranger to invasive species. There are many destructive plants and animals that are well-established here, and we are under constant threat of invasion by many more. 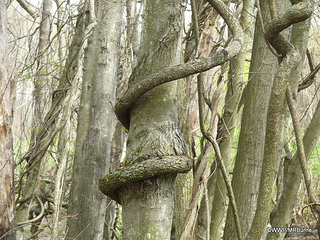 The CISMA Species of Concern

The SuAsCo CISMA focuses most of its effort on the two groups of invasive species: Our Priority Species and Early Detection/rapid response species.

These species are established and wide-spread in the CISMA watershed, and infestations are relatively well-known and typically are still expanding. Management occurs by a variety of approaches, often focused on containment rather than eradication.

These species may not yet have arrived in our watershed but they are getting nearer our area. They may also have been found in a small number of localized infestations. By detecting them early, and focusing efforts on complete eradication, there is an opportunity to prevent the establishment of these species. Education is a key element of any efforts to prevent the establishment of these species.

A wide variety of methods are used to control invasive species. These methods range from hand pulling, to mechanical harvest, to herbicide and pesticide application. Each species responds to different methods and are best treated at different times of the year.