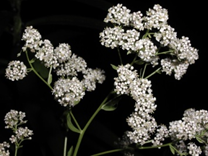 Broad-leaved pepperweed, also called tall pepperweed, perennial peppergrass, tall whitetop, giant whiteweed, and ironweed is an herbaceous perennial that can grow up to 5 feet tall. Plants have many stiff, upright stems that grow from a woody crown of roots. Old stems persist through the winter with rosettes of leaves at the base. The basal leaves, which have long petioles, are up to 1 foot long and 3 inches wide; they have serrated margins, and taper at the end. Leaves on the stems are smaller, have shorter petioles or are attached to the stalk, and may have smooth margins. Leaves and stems are waxy and bright green or gray green. Plants blossom from summer to fall, with dense clusters of very small flowers forming at the ends of the stems. The flowers have 4 white petals, 4 green sepals, 6 stamens, and a single pistil. The fruits are small, flat pods that are about 1/10th inch long; each holds 2 tiny, flattened, reddish-brown seeds. Plants smell (and taste) like horseradish.

Perennial pepperweed can grow from seeds dispersed from the fruit, but new plants usually grow from underground roots (rhizomes) or from fragments of the brittle roots. Roots may break off and float to new locations or be dispersed by animals, humans, or vehicles.

No other plants in Massachusetts bear a close resemblance to broad-leaved pepperweed. Other Lepidium species, such as hoary cress (Lepidum draba) are annuals and are much smaller in stature.

Native to southern Europe and western Asia, broad-leaved pepperweed may have been accidently introduced into the United States in shipments of sugar beet seeds. It is now found throughout the West. In the East, it is primarily found on the coastlines of New York, Connecticut, Massachusetts, New Hampshire, and Maine.