Exotic bush honeysuckles are upright, generally deciduous shrubs that range from 6 to 15 feet in height. The 1-2 ½ inch, egg-shaped leaves are opposite along the stem and short-stalked. Older stems are often hollow. Pairs of fragrant, tubular flowers less than an inch long are borne along the stem in the leaf axils. Flower color varies from creamy white to pink or crimson in some varieties of Tartarian honeysuckle. Flowering generally occurs from early to late spring, but varies for each species and cultivar. The fruits are red to orange, many-seeded berries. Unlike the exotics, most of our native bush honeysuckles have solid stems.

Native bush honeysuckles may be confused with exotic bush honeysuckle, so proper identification is important. However, our native shrub honeysuckles are generally smaller and do not grow in the dense colonies typical of the invasive honeysuckles. Viburnums (Viburnum spp.) also have opposite leaves, but the trunk is not lined, and the flowers and fruit clusters are very different in appearance.

Exotic bush honeysuckles can rapidly invade and overtake a site, forming a dense shrub layer that crowds and shades out native plant species. They alter habitats by decreasing light availability, by depleting soil moisture and nutrients, and possibly by releasing toxic chemicals that prevent other plant species from growing in the vicinity. The fruits of exotic bush honeysuckles, while abundant and rich in carbohydrates, do not offer migrating birds the high-fat, nutrient-rich food sources needed for long flights, that are provided by native plant species.

Exotic bush honeysuckles were introduced as ornamentals for wildlife cover and for soil erosion control.

Invasive honeysuckle range covers most of the central and eastern United States, and they are distributed throughout New England. Exotic bush honeysuckles are relatively shade-intolerant and most often occur in forest edges, abandoned fields, pastures, roadsides and other open, upland habitats. Woodlands, especially those that have been grazed or otherwise disturbed may also be invaded by exotic bush honeysuckles. Morrow’s honeysuckle and pretty honeysuckle have the greatest habitat breadth and are capable of invading bogs, fens, lakeshores, sand plains and other uncommon habitat types.

Many native plants make excellent substitutes for exotic bush honeysuckles. Some examples include: 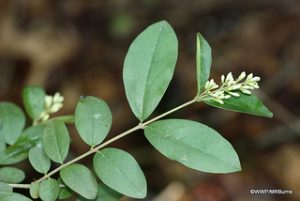 Open-grown exotic bush honeysuckles fruit prolifically and are highly attractive to birds. In the eastern United States, over twenty species of birds feed on the persistent fruits and widely disseminate seeds across the landscape. In established populations, vegetative sprouting also aids in the persistence of these exotic shrubs.

Mechanical and chemical methods are the primary means of control of exotic bush honeysuckles.

Biological
No biological control agents are currently available for these plants, and any potential agents that might be considered would have to be specific to these exotic honeysuckle species.

Manual and Mechanical
Remove seedlings or small plants by hand for light infestations, taking care not to disturb the soil. In shaded forest habitats, cut to ground level at least once every year during the growing season. Tools such as spades, digging forks, and Weed Wrenches can be effective in removing all but the largest honeysuckles.

Chemical
Application of a systemic herbicide like glyphosate (such as Roundup®) is effective in controlling seedlings of exotic bush honeysuckles. Spray a 1 percent solution onto the foliage or apply with a sponge. For larger shrubs, cut the stems to ground level and immediately paint or spray the stumps with a higher rate of glyphosate (25-35%).