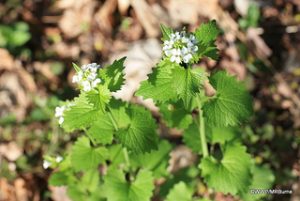 Garlic mustard is a cool season biennial herb with stalked, triangular to heart-shaped, coarsely toothed leaves that give off an odor of garlic when crushed. First-year plants appear as a rosette of green leaves close to the ground. Rosettes remain green through the winter and develop into mature flowering plants the following spring. Flowering plants of garlic mustard reach from 2 to 3-½ feet in height and produce button-like clusters of small white flowers, each with four petals in the shape of a cross.

It is important to identify garlic mustard correctly, as several white-flowered native plants occur alongside garlic mustard and may be mistaken for it, including toothworts (Dentaria spp.), sweet cicely (Osmorhiza claytonii), and early saxifrage (Saxifraga virginica).

Seeds, which become shiny black when mature, are produced in May in erect, slender pods. By late June, when the foliage of most garlic mustard plants has withered, they can be recognized by the erect stalks of dry, pale brown seedpods that remain, and may hold viable seed, through the summer. 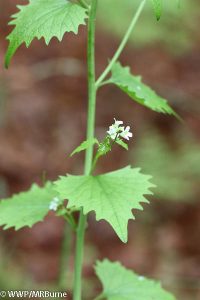 In the first year of growth, the plants form clusters of round shaped, slightly wrinkled leaves, that when crushed smell like garlic. The next year the plants flower in early spring, producing cross shaped white flowers in dense clusters. As the flowering stems bloom they elongate into a spike-like shape. When blooming is complete, plants produce upright fruits that release seeds in midsummer. Plants are often found growing along the margins of hedgerows, giving rise to the old British folk name of Jack-by-the-Hedge. Other common names include Garlic Root, Hedge Garlic, Sauce-alone, Jack-in-the-Bush, Penny Hedge and Poor Man’s Mustard. The genus name Alliaria, “resembling Allium”, refers to the garlic-like odor of the crushed foliage.

Several white-flowered native plants occur in the same habitats as garlic mustard and may be mistaken for it. Cut-leaved toothwort (Cardamine concatenata) resembles garlic mustard but is smaller and has narrow, finger-like leaves. Other look-alikes include sweet cicely ( Osmorhiza claytonia and O. longistylis), which have fern-like leaves and five petals, and early saxifrage (Saxifraga virginica), a small plant with clusters of 5-petalled white flowers.

Garlic mustard poses a severe threat to native plants and animals in forest communities in much of the eastern and midwestern U.S. Many native wildflowers that complete their life cycles in the springtime (such as spring beauty (Claytionia caroliniana), wild ginger (Asarum canadense), bloodroot (Sanguinaria canadensis), Dutchman’s breeches (Dicentra cucullaria), hepatica (Anemone americana), toothworts (Cardamine spp.), and trilliums (Trillium spp.) occur in the same habitat as garlic mustard. Once introduced to an area, garlic mustard outcompetes native plants by aggressively monopolizing light, moisture, nutrients, soil and space. Wildlife species that depend on these early plants for their foliage, pollen, nectar, fruits, seeds and roots, are deprived of these essential food sources when garlic mustard replaces them. Humans are also deprived of the vibrant display of beautiful spring wildflowers.

Garlic mustard also poses a threat to one of our rare native insects, the West Virginia white butterfly (Pieris virginiensis). Several species of spring wildflowers known as “toothworts”, also in the mustard family, are the primary food source for the caterpillar stage of this butterfly. Invasions of garlic mustard are causing local extirpations of the toothworts, and chemicals in garlic mustard appear to be toxic to the eggs of the butterfly, as evidenced by their failure to hatch when laid on garlic mustard plants.

Garlic mustard was first recorded in the United States about 1868, from Long Island, New York. It was likely introduced by settlers for food or medicinal purposes. Garlic mustard ranges from eastern Canada, south to Virginia and as far west as Kansas and Nebraska.

Garlic mustard frequently occurs in moist, shaded soil of river floodplains, forests, roadsides, edges of woods and trails edges and forest openings. Disturbed areas are most susceptible to rapid invasion and dominance. Though invasive under a wide range of light and soil conditions, garlic mustard is associated with calcareous soils and does not tolerate high acidity. Growing season inundation may limit invasion of garlic mustard to some extent.

After spending the first half of its two-year life cycle as a rosette of leaves, garlic mustard plants develop rapidly the following spring into mature plants that flower, produce seed and die by late June. In the mid-Atlantic Coastal Plain region, seeds are produced in erect, slender, four-sided pods, called siliques, beginning in May. Siliques become tan and papery as they mature and contain a row of shiny black seeds. By late June, most of the leaves have faded away and garlic mustard plants can be recognized only by the dead and dying stalks of dry, pale brown seedpods that may hold viable seed throughout the summer.

A single plant can produce thousands of seeds, which scatter as much as several meters from the parent plant. Depending upon conditions, garlic mustard flowers either self-fertilize or are cross-pollinated by a variety of insects. Self-fertilized seed is genetically identical to the parent plant, enhancing its ability to colonize an area. Although water may transport seeds of garlic mustard, they do not float well and are probably not carried far by wind. Humans and wildlife aid in the long-dispersal of the plant since seeds will attach to clothing, boots, and animal hair. Its spread in woodlands is also aided by the preferential browsing of deer on native herbaceous species and the disturbances to the soil caused by deer trampling.

Management objectives in infested sites are to prevent the spread of garlic mustard beyond its known boundaries, prevent seed production, and exhaust the seed bank. Survey the site to determine the extent of invasion, and work from the least infested to most infested areas.

Seeds of garlic can remain viable in the soil for five years or more. Effective management requires a long term commitment. The goal is to prevent seed production until the stored seed is exhausted.

For disposal options, refer to the control and disposal page.

Manual, mechanical and chemical control methods are effective in removing and killing garlic mustard. A combination of methods often yields the best results and may reduce potential impacts to native plants, animals and people. The method selected depends on the extent and type of infestation, the amount of native vegetation on the site, and the time, labor and available resources. Regardless of the control method employed, annual monitoring is necessary for a period of at least five years to ensure that seed stores of garlic mustard have been exhausted.

Biological
Several insects are being tested for biological control of garlic mustard.

Manual
Hand removal of plants is possible for light infestations and where native species co-occur with it. When the soil is moist, firmly grasp the plant low and tug gently until the main root loosens from the soil and the entire plant pulls out. Remove the plant with its entire root system or new plants may sprout from root fragments. Collect and bag the plants and dispose of them in heavy garbage bags. Dig up the roots any time during spring, summer, or fall.

For larger infestations of garlic mustard, or when hand-pulling is not practical, cut the flowering stems at ground level or within several inches of the ground to prevent seed production. If stems are cut too high, the plant may produce additional flowers at the leaf axils. Once seedpods are present, but before the seeds have matured or scattered, the stalks can be clipped, bagged and removed from the site to help prevent continued buildup of seed stores. This can be done late spring through early summer.

Mechanical
Fire has been used to control garlic mustard in some large natural settings but, because burning opens the understory, it can encourage germination of stored seeds and promote the growth of emerging garlic mustard seedlings. For this reason, burns must be conducted for three to five consecutive years. This method becomes less effective as first-year plants develop taproots.

Chemical
Application of a systemic herbicide to the foliage of garlic mustard is effective for heavy infestations where the risk to desirable plant species is minimal. A 1-2% solution of a glyphosate herbicide such as Roundup Pro is most commonly used to control garlic mustard, although triclopyr herbicides such as Brush-B-Gone are also widely used.

Apply herbicide when the temperature is above 50 °F. and rain is not expected for about 8 hours. Avoid desirable plants, as glyphosate is non-selective and will kill almost any plant it contacts. Spray shields may be used to better direct herbicide and limit non-intentional drift.

First-year plants are most vulnerable, and second-year plants should be treated well before the seeds ripen. Apply the herbicide to rosettes in very early spring or late fall when most native vegetation is dormant but garlic mustard remains green. Because garlic mustard begins active growth early in spring and stays green through winter, identification is easy and spraying should not harm dormant, non-target species.

Spring application is effective, and two generations of garlic mustard can be killed if both new seedlings and overwintering rosettes are targeted. By the time seedlings have sprouted, however, many other woodland species have emerged and will be harmed if sprayed. Herbicide can be applied until flowering begins, but if applied too late seeds may still mature. Fall application on first-year rosettes can also be very effective on a warm day, but dry conditions may inhibit translocation of herbicide to roots and limit the kill rate. Fallen leaves in autumn may also cover plants and shield them from the spray.

Abugatta, Alonso. 1996. Progress made in educating about problems with invasive plants. Virginia Native Plant Society Newsletter, Vol. 15, No. 3, (May) p. 5.