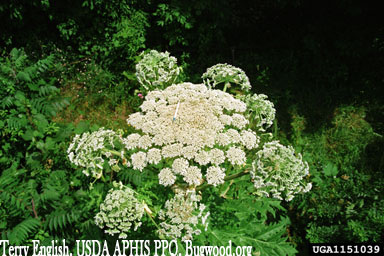 Giant hogweed is an herbaceous perennial species that grows over 15 feet in height. It is native to the Caucasus Mountains and southwest Asia. The stem, which is blotched with purple and covered with short hairs, is 2 to 4 inches in diameter. The huge, 5-10 foot wide leaves are sharply divided and deeply lobed. The inflorescence is a flat-topped umbel of small white flowers characteristic of many members of the parsley family (such as Queen Anne’s-lace). On giant hogweed, the umbel is about 2.5 feet in diameter. It blooms in June and July. Preferred habitats include roadsides, vacant lots, and moist soils along rivers and streams.

The plant spreads by seed, which may be transported by water.

The native cow parsnip (Heracleum maximum) is similar in appearance, but shorter (a maximum of 8-10 feet in height), and its leaves are much smaller and less sharply divided. There are several other members of the parsley family that could be mistaken for giant hogweed. The IPANE and Pennsylvania State University websites referenced below provide useful text and image guides to distinguish the species.

Giant hogweed is on the federal noxious weed list because its sap contains phyto-toxic compounds that are a danger to people. The sap makes skin very vulnerable to ultraviolet radiation, causing deep and persistent burns when skin contacts the plant. 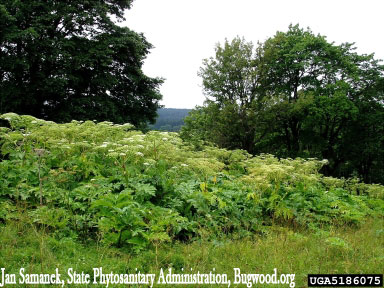 Giant hogweed has been documented in a number of northern states from Washington and Oregon to Maine. It occurs in Connecticut and in Massachusetts, where it has been reported in 16 towns. These infestations are tracked and managed by the MA Department of Agricultural Resources.

To find out more information or to report a sighting, visit this site:
http://www.massnrc.org/pests/pestFAQsheets/hogweed/giant_hogweed.htm