Hydrilla, also known as water thyme, is a submerged, aquatic, perennial herbaceous plant that can grow from depths of 20-25 feet. The stems have whorls of 3-8 tiny, strap-like leaves that are 0.2 to 0.8 inches long and 0.07-0.15 inches wide. The leaves have saw-toothed margins visible with a hand lens. Hydrilla has both male and female flowers. The female flowers (0.5 to 2 inches in length), elevated on thread-like stalks, have 3 translucent petals and 3 white sepals. The male flowers are so tiny (0.07 inches) that they can barely be seen. Conspicuous parts of the plants are the bulb-like turions (sometimes called stem tubers) that grow in leaf axils, and true tubers, which grow at the base of the stem. The turions and tubers are about 0.25 inch in length. Hydrilla, which is probably native to Asia, infests lakes, rivers, reservoirs, and ponds. It can occur in brackish as well as fresh water.

Hydrilla primarily spreads by stem fragmentation. The turions and tubers also fall off the plant, overwinter in sediments, and develop into new plants the following year.

Brazilian waterweed (Egeria densa) is similar, but lacks the turions and tubers characteristic of hydrilla. 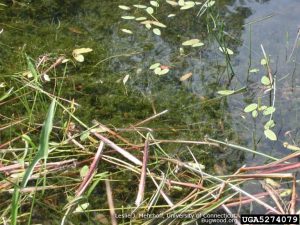 Hydrilla forms dense mats that crowd out native vegetation. It can alter water quality by raising pH levels, decreasing oxygen, and raising water temperature. The dense growth is an impediment to boating, fishing, and swimming.

Hydrilla occurs in most of the southern tier of the United States from California to Florida. It is present throughout the southeast and in most of the eastern seaboard from Maine to Florida. According to IPANE records, there are three occurrences in Connecticut, one in southern Maine, and one on Cape Cod.