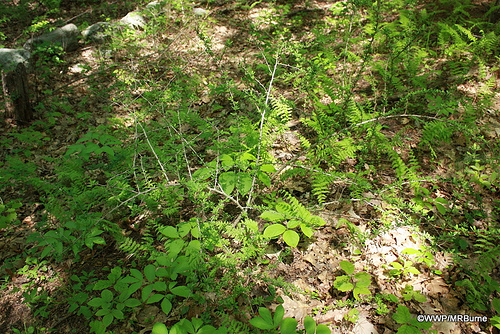 Japanese barberry is a dense, deciduous, spiny shrub that grows 2 to 8 ft. high. The branches are brown, deeply grooved, somewhat zigzag in form and bear a single very sharp spine at each node. The leaves are small (½ to 1 ½ inches long), oval to spatula-shaped, green, bluish-green, or dark reddish purple. Flowering occurs from mid-April to May in the northeastern U.S. Pale yellow flowers about ¼ in (0.6 cm) across hang in umbrella-shaped clusters of 2-4 flowers each along the length of the stem. The fruits are bright red berries about 1/3 in (1 cm) long that are borne on narrow stalks. They mature during late summer and fall and persist through the winter. 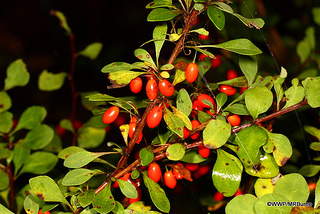 Japanese barberry was introduced to the U.S. and New England as an ornamental plant in 1875 in the form of seeds sent from Russia to the Arnold Arboretum in Boston, Massachusetts. In 1896, barberry shrubs grown from these seeds were planted at the New York Botanic Garden. Japanese barberry was later promoted as a substitute for common barberry (Berberis vulgaris) which was planted by settlers for hedgerows, dye and jam, and later found to be a host for the black stem grain rust. Because Japanese barberry has been cultivated for ornamental purposes for many years, a number of cultivars exist.

Japanese barberry has been reported to be invasive in twenty states and the District of Columbia. Due to its ornamental characteristics, Japanese barberry is still widely propagated and sold by nurseries for landscaping purposes in many parts of the U.S.

Japanese barberry is shade tolerant, drought resistant, and adaptable to a variety of open and wooded habitats, wetlands and disturbed areas. It prefers to grow in full sun to partial shade but will flower and fruit even in heavy shade.

Many attractive native shrubs are available that make excellent substitutes for Japanese barberry and are readily available. Some examples for the eastern United States include:

Japanese barberry spreads by seed and by vegetative expansion. Barberry produces large numbers of seeds which have a high germination rate, estimated as high as 90%. Barberry seed is transported to new locations with the help of birds (such as turkey and ruffed grouse) and small mammals which consume the fruits. Birds frequently disperse seed while perched on power lines or on trees at forest edges. Vegetative spread is through branches touching the ground that can root to form new plants and root fragments remaining in the soil that can sprout to form new plants.

Do not plant Japanese barberry. Since it is a prolific seed-producer with a high germination rate, prevention of seed production should be a management priority. Completely remove the root portions as barberry can re-sprout from root fragments remaining in soil.

Plant Control
Manual control works well but may need to be combined with chemical in large or persistent infestations.

Biological
No biological control organisms are available for this plant.

Manual
Begin removal efforts in early spring. Pull small plants by hand when the soil is damp and loose, using thick gloves to avoid injury from the spines. Remove the entire root system. Dig up young plants with a hoe or shovel.

Removal of plants up to about 3 ft high is effective if the root system is loosened up around the primary tap root first before digging out the whole plant.

Mechanical
Use of a hoe or Weed Wrench ® is effective and may pose the least threat to non-target species and the general environment at the site. Tools like the Weed Wrench are useful when uprooting larger or older shrubs. Shrubs can be repeatedly mowed or cut. Mow and cut the plant in late summer to reduce seed production.

Chemical
Treatments using the systemic herbicides glyphosate (such as Roundup®) and triclopyr (such as Garlon) have been effective in managing Japanese barberry infestations that are too large for hand pulling.

For foliar treatments, apply a 2% solution of glyphosate mixed with water and a surfactant. Use this non-selective herbicide with care to avoid impacting non-target native plants. Apply early in the season before native vegetation has matured to minimize non-target impacts.

Application in late summer during the fruiting period may be most effective. Use triclopyr or glyphosphate on cut stumps, with a 25-30% concentration of the active ingredient. Make sure to apply the herbicide immediately after the stem is cut.