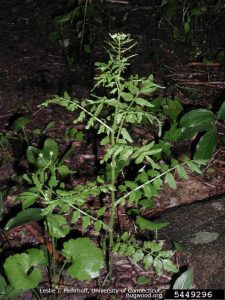 Narrow-leaf bittercress is an herbaceous annual or biennial plant that can reach two feet in height. When narrow-leaf bittercress occurs as a biennial, the first year’s growth is a basal rosette of leaves. In the second year, it produces a flowering stem. The basal leaves of the plant are deeply divided into three to eleven leaflets. The stem leaves are also divided into multiple small, sharply-toothed leaflets. At the base of each stem leaf there are two small projections (auricles) that wrap part-way around the stem. The inflorescence is a thin cluster of small, white, four-petalled flowers that bloom from May to mid-summer. The flowers develop into narrow, almost linear seedpods (known as siliques) which resemble very narrow, ascending braches at the top of the plant. Each silique, which is 0.6 to 0.8 inch in length, contains 10-24 seeds.

Narrow-leaf bittercress seedpods can “shoot” seeds a short distance from the parent plant, and colonies quickly develop from an initially sparse infestation. The seeds are distributed by water currents, wildlife, people, and vehicles. The plant is able to self-pollinate.

Several other mustard plants in the Cardamine genus resemble narrow-leaf bittercress. These species include:

The auricles, or projections at the base of the leaf where it meets the stem, are the best way to distinguish narrow-leaf bittercress from other bittercress species.

Narrow-leaf bittercress can invade rapidly into a variety of natural habitats, including moist woodlands, floodplains, meadows, and low swampy ground.

In the United States, narrow-leaf bittercress ranges from Virginia to Maine and westward to Kentucky and Michigan. It is listed as a noxious weed in Massachusetts and Connecticut.