Purple loosestrife is an erect perennial herb in the loosestrife family, with a square, woody stem and opposite or whorled leaves. Leaves are lance-shaped, stalkless, and heart-shaped or rounded at the base. Plants are usually covered by a downy pubescence. Loosestrife plants grow from four to ten feet high, depending upon conditions, and produce a showy display of magenta-colored flower spikes throughout much of the summer. Flowers have five to seven petals. Mature plants can have from 30 to 50 stems arising from a single rootstock.

Blue vervain (Verbena hastate) occurs in the same habitats as purple loosestrife and may be mistaken for it. 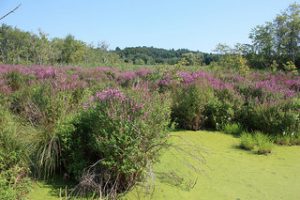 Purple loosestrife adapts readily to natural and disturbed wetlands. As it establishes and expands, it outcompetes and replaces native grasses, sedges, and other flowering plants that provide a higher quality source of nutrition for wildlife. The highly invasive nature of purple loosestrife allows it to form dense, homogeneous stands that restrict native wetland plant species, including some federally endangered orchids, and reduce habitat for waterfowl. Purple loosestrife is capable of invading many wetland types, including freshwater wet meadows, tidal and non-tidal marshes, river and stream banks, pond edges, reservoirs, and ditches.

Purple loosestrife was introduced to the northeastern U.S. and Canada in the 1800s for ornamental and medicinal uses. It is still widely sold as an ornamental, but it has been banned in a number of states, including Massachusetts and Connecticut. According to the U.S. Fish and Wildlife Service, purple loosestrife now occurs in every state except Florida.

Purple loosestrife enjoys an extended flowering season, generally from June to September, which allows it to produce vast quantities of seed. The flowers require pollination by insects, for which it supplies an abundant source of nectar. A mature plant may have as many as thirty flowering stems capable of producing an estimated two to three million, minute seeds per year.

Small infestations of young purple loosestrife plants may be pulled by hand, preferably before seed set. However, the root systems are deep and tough. Pulling larger plants is laborious work. For older plants, spot treat the foliage with a glyphosate type herbicide (such as Rodeo® for wetlands and Roundup® for uplands). These herbicides are most effective when applied late in the season when plant are preparing for dormancy. However, it may be best to do a mid-summer and a late season treatment, to reduce the amount of seed produced. 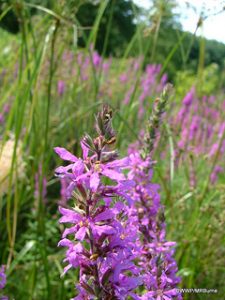 While herbicides and hand removal may be useful for controlling individual plants or small populations, biological control is seen as the most likely candidate for effective long term control of large infestations of purple loosestrife.

Biological
As of 1997, three insect species from Europe have been approved by the U.S. Department of Agriculture for use as biological control agents. These plant-eating insects include a root-mining weevil (Hylobius transversovittatus), and two leaf-feeding beetles (Galerucella calmariensis and Galerucella pusilla). Two flower-feeding beetles (Nanophyes) that feed on various parts of purple loosestrife plants are still under investigation. Galerucella and Hylobius have been released experimentally in natural areas in a number of northern states, including Massachusetts, where they have successfully reduced a number of large stands of loosestrife.

Manual
In areas where there are few plants and easy access, manually remove the plants. Pulling Purple Loosestrife by hand is easiest when plants are young (up to two years) or in sand. Older plants have larger roots that can be eased out with a garden fork. Remove as much of the root system as possible, because broken roots may sprout new plants. The problem with manual removal is the resulting soil disturbance. Purple loosestrife roots are deep, and their removal inevitably leaves patches of bare ground which can be re-invaded by purple loosestrife or other invasive species.

The removal of flowering spikes will prevent seed production of the current crop of plants. Each mature plant can produce over 2 million seeds per year. Also remove the previous year’s year’s dry seed heads, as they may still contain seeds. Cut the stems at the ground to inhibit growth.

Collect and bag the plants and dispose of them in heavy garbage bags to prevent reestablishment. Composting is not advised, as purple loosestrife seeds may not be destroyed and the thick, woody stem and roots take a long time to decompose. Incineration is an effective way to dispose of plant material.

Chemical
A wetland glyphosate herbicide such as Rodeo, applied as a 1-2% solution, can be applied as a foliar spray to spot treat small infestations.