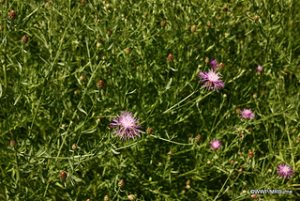 Spotted knapweed, previously known as Centaurea biebersteinii, is a biennial or short-lived perennial. Its name is derived from the spots formed by black margins on the flower bract tips. Spotted knapweed typically forms a basal rosette of leaves in its first year and flowers in subsequent years. Rosette leaves are approximately 8 inches long by 2 inches wide, borne on short stalks, and deeply lobed once or twice on both sides of the center vein, with lobes oblong and wider toward the tip. The taproot is stout and deep. Flowering stems are erect, 8 to 50 inches tall, branched above the middle, and sparsely to densely hairy. Stem leaves alternate along the stem, are unstalked, and may be slightly lobed, or linear and unlobed. Leaf size decreases towards the tip of the stem.

Flowers are purple to pink, rarely white, with 25 to 35 flowers per head. Plants bloom from June to October, and flower heads usually remain on the plant. Flower heads are oblong or oval shaped, ¼ inch wide and ½ inch across, and are single or borne in clusters of two or three at the branch ends. Leaf like bracts surrounding the base of the flower head are oval and yellow green, becoming brown near the base. The margins of these bracts have a soft spine like fringe, with the center spine being shorter than the lateral spines. The brown, oval seeds are 1/16 to 1/8 inch long, with pale longitudinal lines and a short fringe on one end.

Other knapweeds that are similar in appearance include:

Spotted knapweed is a widely distributed species reported to occur throughout Canada and in every state in the U.S. except Alaska, Georgia, Mississippi, Oklahoma and Texas. It has been identified as invasive in natural areas by eighteen organizations in twenty-six states. Fifteen national parks also identify spotted knapweed as an invasive plant and a threat to natural habitats. 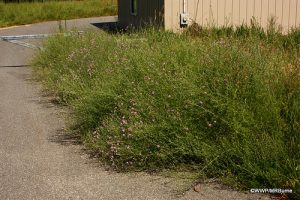 Spotted knapweed was introduced to North America from Eurasia as a contaminant in alfalfa and possibly clover seed, and through discarded soil used as ship ballast. It was first recorded in Victoria, British Columbia in 1883 and spread further in domestic alfalfa seeds and hay before it was recognized as a serious problem.

Spotted knapweed is found at elevations from sea level up to and over 10,000 feet and in precipitation zones receiving 8 to 80 inches of rain annually. Spotted knapweed prefers well-drained, light-textured soils that receive summer rainfall. Habitats in the eastern US include old fields, roadsides, and areas with open, sandy soils. In the western US, habitats include open forests dominated by ponderosa pine (Pinus ponderosa) and Douglas fir (Pseudotsuga menziesii), and grass-dominated prairie habitats. Disturbance allows for rapid establishment and spread; however, spotted knapweed is capable of invading well managed rangelands. Spotted knapweed does not compete well with vigorously growing grass in moist areas. In seasonally dry areas, spotted knapweed’s taproot allows it to access water from deep in the soil, beyond the reach of more shallowly rooted species.

Spotted knapweed plants in North America generally live 3 to 7 years but can live up to nine years or longer. Plants re-grow from buds on the root crown. Reproduction is by seed, and plants are capable of producing 500 – 4,000 seeds per square foot per year. About 90% of the seeds are viable at the time of dispersal, and they can remain viable in the soil for 5-8 years. Most seeds are dispersed near the parent plant but can be transported by people, wildlife, livestock, vehicles, and in soil, crop seed, and contaminated hay. Gravel pits, soil stockpiles, power lines, grain elevators, railroad and equipment yards are important seed distribution points.

Biological
Natural enemies are used as biological control agents for large infestations of spotted knapweed. Most biocontrol techniques use insect larvae to damage the root, stem, leaf, or flower. Two species of seed head flies, Urophora affinis and U. quadrifasciata, are well-established on spotted knapweed. The larvae of these species reduce seed production by as much as 50% by feeding on spotted knapweed seed heads and causing the plant to form galls. Three moth species (Agapeta zoegana, Pelochrista medullana, and Pterolonche inspersa) and a weevil (Cyphocleonus achates) that feed on spotted knapweed roots have also been released.

The collective stress on the plant caused by these insects reduces seed production and may lead to reduced competitiveness. Biological control agents may be more effective when combined with other control methods such as herbicides, grazing, and revegetation with desirable, competitive plants.

Manual and Mechanical
Small infestations of spotted knapweed can be controlled by persistent hand-pulling done prior to seed set. Gloves should be worn because of the possibility of skin irritation. Remove the entire crown and taproot since spotted knapweed can regrow from the base.

Control of spotted knapweed infestations using three chemical herbicides (2,4-D, clopyralid, and picloram) has been reported but is problematic. Existing plants can be killed with 2,4-D but it needs to be reapplied yearly to control new plants germinating from seed stored in the soil.

Picloram is a more persistent herbicide and has controlled knapweed for three to five years when applied at 0.25 lb/acre at any stage of plant growth; or with clopyralid (0.24 lb/acre) or clopyralid (0.2 lb/acre) plus 2,4-D (1 lb./acre) applied during bolt or bud growth stage.

When desirable native grasses are not available, plant competitive grasses and forbs. Picloram may pose a risk of groundwater contamination where soils are permeable, particularly where the water table is shallow.

Other methods
Long-term grazing by sheep and goats has been found to control spotted knapweed. Burning, cultivation, and fertilization typically are not effective on spotted knapweed unless combined with other methods of control.