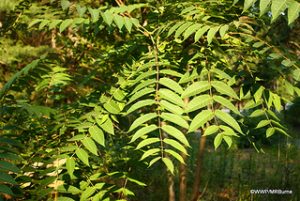 Tree-of-heaven, also known as ailanthus, Chinese sumac, and stinking shumac, is a deciduous tree in the mostly tropical quassia family. Mature trees can reach 80 feet in height. Tree-of-heaven has smooth stems with pale gray bark and twigs which are light chestnut brown, especially in the dormant season. Its large compound leaves are 1-4 feet in length, alternate, and composed of 10-41 smaller leaflets. Each leaflet has one or more glandular teeth along the lower margin. The leaf margins are otherwise entire or lacking teeth. Tree-of-heaven is a dioecious (“two houses”) plant, meaning that male and female flowers occur on separate plants. Flowers occur in large terminal clusters and are small and pale yellow to greenish. Flat, twisted, winged fruits each containing a single central seed are produced on female trees in late summer to early fall and may remain on the trees for long periods of time. The wood of tree-of-heaven is soft, weak, coarse-grained, and creamy white to light brown in color. All parts of the tree, especially the leaves and flowers, have a nutty or burned nut odor. [Insert tree-of-heaven photo]

It is important not to confuse native shrubs and trees with tree-of-heaven. Native sumacs (Rhus) and trees like ash (Fraxinus), hickory (Carya), black walnut, butternut and pecan (Juglans) can be distinguished from tree-of-heaven by having completely serrated (toothed) leaf margins.

Tree-of-heaven is a fast-growing tree and a prolific seeder that can take over sites, replacing native plants and forming dense thickets. Tree-of-heaven also produces chemicals (releases toxins into the soil) that prevent the establishment of other plant species nearby. Seedlings and root suckers of tree-of-heaven grow rapidly and spread prolifically and thus quickly out-compete many native species for sunlight and space. The tree also produces a toxin in its bark and leaves. As it accumulates in the soil, the toxin inhibits the growth of other plants. The root system is capable of damaging sewers and foundations. Contact with the plant can cause dermatitis (a skin disorder) in some people. 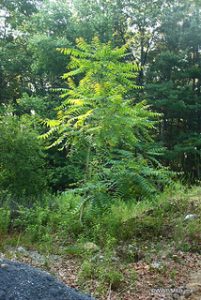 Tree-of-heaven was first introduced to America by a gardener in Philadelphia, PA, in 1784, and by 1840 was commonly available from nurseries. The species was brought into California mainly by the Chinese who came to California during the gold rush in the mid-1800s. Today it is still found in abandoned mining sites there. The history of tree-of-heaven in China is as old as the written language of the country. Tree-of-heaven occurs in many states across the continental U.S. and Hawaii, and to date is reported to be invasive in natural areas in 30 states. It is now widely distributed across the United States, occurring in 42 states, from Maine to Florida and west to California. [Insert photo of the distribution map] Tree-of-heaven is a common tree in disturbed urban areas, where it sprouts up just about anywhere, including alleys, sidewalks, parking lots, and streets. For example, the book “A Tree Grows in Brooklyn”, by Betty Smith, is based on the tree-of-heaven. Away from cities, tree-of-heaven is commonly seen in fields, and along roadsides, fencerows, woodland edges and forest openings. It occurs as seedlings that pop up by the hundreds in recently planted fields and as persistent thickets in rocky, untillable areas. Nationally, tree-of-heaven is a serious agricultural pest.

Tree-of-heaven reproduces both sexually (by seeds) and asexually through vegetative sprouting. Flowering occurs late in the spring. Tree-of-heaven is dioecious, with male and female flowers on separate plants. The fruits, or samaras, occur in terminal clusters on female plants during the summer, and may persist on the tree through the winter. Tree-of-heaven colonizes by root sprouts and seeds that are spread by wind and water. Seedlings establish a taproot three months after germination. Sprouts can grow 10 to 14 feet the first year and seedlings can grow 3 to 6 feet in the first year. Viable seeds are present on 2 to 3 year old trees. One study reports that an individual tree can produce as many as 325,000 seeds per year. Established trees also produce numerous suckers from the roots and re-sprout vigorously from cut stumps and root fragments.

Many attractive native trees and shrubs make excellent substitutes for tree-of-heaven and are readily available. Some examples for the eastern United States include deciduous shrubs, such as:

Due to its abundant seed production, high seed germination rate, and vegetative reproduction, elimination of tree-of-heaven requires diligence and a long-term commitment. Follow-up monitoring and treatment must be an integral part of any serious tree-of-heaven management program. For all management methods, treated areas should be rechecked one or more times a year and any new suckers or seedlings treated (cut, sprayed or pulled) as soon as possible, especially before they rebuild root reserves. Establishing a thick cover of native trees, native grasses such as deer-tongue grass (Panicum clandestinum), or grass sod will shade out and discourage establishment of tree-of-heaven seedlings. Targeting large female trees for control will help reduce spread of tree-of-heaven by seed. For disposal options, refer to disposal options page.

Plant Control
Cut down large trees with a chainsaw and treat the outer two inches of the cut stump surface with an undiluted glyphosate concentrate. If seed clusters are present on the cut limbs, collect, bag and dispose of them in heavy garbage bags so they do not sprout. Large saplings can be treated in a similar fashion, taking care to treat the entire cut surface. If numerous small saplings are present and the foliage is within your reach, apply a 2% glyphosate solution as a foliar treatment in late summer. If the solution does not already contain a pre-mixed surfactant that allows the herbicide to adhere to the foliage, add a non-ionic surfactant to the solution (approximately 0.5% of the total spray volume). If wind-borne seeds are coming from an off-site source, annual monitoring will be necessary to control new seedlings. Hand pulling is very effective on very young tree-of-heaven seedlings. Plants should be pulled as soon as they are large enough to grasp. Seedlings are best pulled after a rain when the soil is loose. The entire root must be removed since broken fragments may re-sprout.

Biological Control
Several fungal pathogens are being investigated as potential biological controls for tree-of-heaven. Two of these, Verticillium dahliae and Fusarium oxysporum, have been isolated from dead and dying tree-of-heaven trees in New York and in southern and western Virginia. A disease affecting tree-of-heaven in Pennsylvania was studied using inoculations in the lab and on canopy field trees; the agent was identified to be Verticillium albo-atrum and is being suggested as a potential biocontrol agent pending further studies including risk analysis. None are available for use at this time however.

Manual Control
Young seedlings may be pulled or dug up, preferably when the soil is moist. Care must be taken to remove the entire plant, including all roots and fragments, as these will almost certainly regrow. Root suckers appear similar to seedlings, but would be connected to a pre-existing lateral root, and would be nearly impossible to remove effectively. Girdling the tree by cutting the bark all around the trunk may kill the tree above the cut. This method is not an effective long term measure, and the roots will almost certainly regrow.

Mechanical Control
Cutting alone is usually a counter-productive strategy because tree-of-heaven responds by producing large numbers of stump sprouts and root suckers. However, for small infestations, repeated cutting of sprouts over time can exhaust the plant’s root reserves and may be successful if continued for many years. If possible, the initial cutting should be in early summer in order to impact the tree when its root reserves are lowest. Cutting large seed-producing female trees would at least temporarily reduce spread by this method.

Chemical Control
Herbicides appear to be the most effective method of controlling tree-of-heaven. Herbicides may be applied as a foliar (to the leaves), basal bark, cut stump, or hack and squirt treatment. Keep in mind that while it is relatively easy to kill the above-ground portion of tree-of-heaven trees, you need to kill or seriously damage the root system to prevent or limit stump sprouting and root suckering. Always be extremely careful with herbicide applications in the vicinity of valuable ornamental shrubs and trees.

CAUTION: APPLYING HERBICIDES TO CONTROL INVASIVE PLANTS ON PROPERTY YOU DO NOT PERSONALLY OWN REQUIRES A PESTICIDE APPLICATOR’S LICENSE ISSUED BY THE STATE.