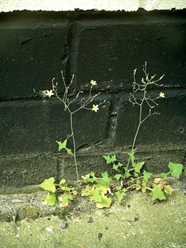 Wall lettuce is a slender annual or biennial herbaceous plant. The smooth, erect stems grow from fibrous roots. Stems are 2–3 feet tall and branch near the top; when broken, they exude a milky fluid that can irritate the skin. Leaves at the base of the stems have deep, pointed lobes and a large triangular lobe at the end. Basal leaves are 2 ½ –7 inches long and 1–3 inches wide; the few leaves that grow higher on the stems are smaller. In June, small, light yellow flowers form on the widely spaced stems. Each flower head is composed of 5 narrow rays; the blunt ends of the rays have 5 small teeth. The fruits are small achenes with prominent veins; each achene has a tuft of long, white, bristly hairs. Wall lettuce can grow in either deep shade or full sun and in a wide range of soil conditions; it is tolerant of drought and frost.

Wall lettuce produces a great quantity of seeds—in a sunny area, a single plant may produce more than 10,000 seeds. The tufts of hairs attached to the fruits act as parachutes that allow them to float on the wind, dispersing the seeds over long distances. Plants do not reproduce vegetatively.

A key feature of wall lettuce that helps to distinguish it from other yellow-flowered plants in the aster family (such as dandelion, the hawkweeds, sow-thistles, and other wild lettuces) are the five-rayed flowers. Similar-looking species have many more rays. The leaves of wall lettuce are also distinctive, with a large triangular lobe at the end and bases that clasp the stem.

Wall lettuce quickly invades many habitats, where it may displace native species. Because it produces so many seeds, wall lettuce can quickly take over an area, carpeting the ground in just a few seasons. It can be especially invasive in forests and wetlands with rich, moist soils.

Native to southern Europe and western Asia, wall lettuce is invasive in Alaska and the Pacific Northwest. It has been found from eastern Canada south to New York and west to Minnesota. In New England, it is currently mapped in Maine, Massachusetts, New Hampshire, and Vermont.