Black or Louis’ swallow-wort (previously Vincetoxicum nigrum and Cynanchum nigrum) is a perennial, twining herbaceous vine. The leaves are oval shaped with pointed tips, 3-4 in. long by 2-3 in. wide, and occur in pairs along the stem. The small five-petaled star shaped flowers are dark purple to almost black with white hairs, about ¼ in. across, and are borne in clusters. The fruits are slender tapered pods, 2 to 3 in. long by about ¼ in. wide, turning from green to light brown as they mature. Plants have rhizomes (underground stems) that sprout new plants and grow in clumps which can form extensive patches.

Black swallow-wort can form extensive patches that crowd out the native vegetation. Old field habitats of goldenrod and grasses can be replaced almost exclusively by swallow-wort. The globally rare alvar ecosystems (limestone pavement barrens supporting unique plant communities), are threatened by many rapidly expanding swallow-wort populations in Jefferson County, New York. Black Swallow-wort threatens to displace Jessup’s milk vetch, a federally listed plant, on the banks of the Connecticut River valley in central Vermont. Investigations into impacts on the monarch butterfly, which requires milkweeds for reproduction, indicate that the butterfly will cue into black swallow-wort and lay eggs, but the larvae do not survive.

The first collection of black swallow-wort in North America was from Ipswich, Essex County, Massachusetts, in 1854. An 1864 Essex County collector recorded that it was “escaping from the botanic garden where it is a weed and promising to become naturalized.” The fifth edition of Gray’s Manual of Botany (1869) reports black swallow-wort to be a weed escaping from gardens in the Cambridge Massachusetts area.

Black swallow-wort is a problem plant in many parts of the country and now is present in every New England state.

Black swallow-wort is associated exclusively with upland areas and is tolerant of a range of light and moisture conditions. The species can be found above the high tide line of some rocky coastal areas where it can tolerate relatively high salt concentrations. Typical habitats include old fields, hedgerows, brushy areas, and the ground layer of woodlands. Areas of both natural and human-caused disturbances, including ice-scoured river banks, talus slopes, transportation corridors, quarries and abandoned agricultural fields, provide susceptible habitats. Black swallow-wort has also been reported to be an intractable weed in gardens of New England. It can occur on both basic and acidic soils. 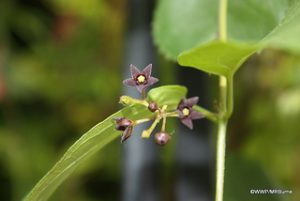 Black swallow-wort emerges in spring and flowers from June to July. The flowers are self-pollinating. Fruits are soon produced, turning from green to light brown as they mature. The number of pods is directly related to the level of light available. When ripe, the fruits open along a seam and release flattened seeds equipped with downy parachutes that aid in wind dispersal. Black swallow-wort spreads long distances by seed. Local spread and establishment is frequently through clonal growth from rhizomes. Thick infestations in full sun can produce 2,000 seeds per square meter. The seeds have one to four embryos per seed which greatly increases the likelihood of seed survival and establishment. Wind dispersal of seed begins in late July to early August and continues throughout late summer and fall. Populations growing under dense wooded canopy may not produce flowers or seeds. Black swallow-wort dies back to the ground every winter.

In the eastern U.S., the native honeyvine (Cynanchum laeve) can be substituted for the invasive black swallow-wort. Other attractive native vines that are widely available in the East include:

As with all invasive species, early detection and removal is the best approach for preventing the establishment and spread of this plant. If you find some black swallow-wort, look for more, and aim to remove all plants at a site. Stay out of patches that are actively dispersing seeds unless you plan to collect and dispose of the seeds carefully. Clean all machinery that has traveled through swallow-wort patches that have maturing or dispersing pods.

Chemical control is the most effective means for large established infestations.

For disposal options, refer to the control and disposal page.

Plant Control
Manual, mechanical and chemical control methods are effective in removing and killing Black swallow-wort. A combination of methods often yields the best results and may reduce potential impacts to native plants, animals and people. The method selected depends on the extent and type of infestation, the amount of native vegetation on the site, and the time, labor and available resources.

Biological
There are no biological controls available for this plant.

Manual
Remove pod-bearing plants from the site and destroy them. Eradication on a small scale must be very thorough and requires dedication. The complete root crown must be dug out before the seeds ripen.

Collect and bag plants bearing seeds and dispose of them in heavy garbage bags. Infested land might be brought under control by plowing and planting an annual crop until the seed soil bank is depleted, possibly as long as five years.

DO NOT SPRAY TOO SOON. Avoid the temptation to spray the plants as soon as they emerge in May. Only when the plants flower will they be large enough to receive enough spray on the exposed leaf surface to deliver a killing dose to the roots. Plants that are sprayed before pods form may not produce a viable seed crop that season. Be patient. Systemic herbicides do not cause a “burn down” of plants like contact herbicides do, but within 1-2 weeks the plants will be visibly weakened. There may be dead tissue spots on most leaves as well as many yellowing leaves. Do not waste herbicide, money or effort by spraying plants twice. Sick plants cannot effectively absorb the herbicide through the leaf surface or move the herbicide to the roots. Swallow-wort is a tough customer, and can take years to eliminate.

DiTommaso A. and Losey, J. E. 2003. Oviposition selection and larval feeding by Monarch Butterflies on two invasive swallow-wort species. Proceeding of the Annual Meeting of the Northeastern Weed Science Society of America 57:121.