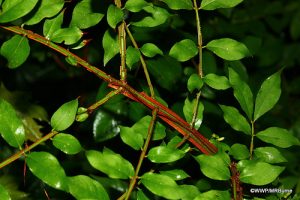 Burning bush, or winged spindletree, grows as a deciduous shrub up to 12 feet tall. Corky ridges form along the green twigs, and give the branches a winged appearance. The leaves are opposite and are elliptical in shape with toothed margins, and turn a brilliant scarlet in the fall. Inconspicuous greenish flowers occur in late spring, and red-purple fruits mature during summer.

Burning bush may be confused with other species of euonymus.

Burning bush threatens a variety of habitats including forests, coastal scrublands and prairies. It is tolerant of moist soils, and can occur in wetlands.

Burning bush replaces native shrubs in some woodland habitats and alters the structure of natural plant communities. It can form dense thickets, displacing many native woody and herbaceous plant species.

Burning bush was imported from Northeastern Asia in the 1860s.

Burning bush is found from New England to northern Florida and the Gulf Coast and also in Illinois. 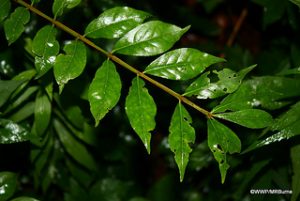 Burning bush spreads easily by root suckers. The fruits of burning bush are dispersed by birds.

Mechanical and chemical methods are the primary means of control of burning bush.

Biological
At this time no means of biological control is available for controlling burning bush.

Manual
Remove young seedlings by hand before they produce seeds. Seedlings are best pulled after a rain when the soil is loose. Remove the entire root system to avoid resprouting.

Mechanical
Cutting or mowing is effective in controlling burning bush. Cutting is most effective when combined with an application of herbicide to cut surfaces.

Stems should be cut at least once during the growing season, and as close to ground level as possible.

A tool such as a weed wrench can be very effective in uprooting plants from the soil.

Chemical
Apply systemic herbicides like glyphosate and triclopyr to control burning bush. Make sure to use a wetland formulated herbicide such as Rodeo, Accord Concentrate, or Garlon 3A if you are working in a wetland.