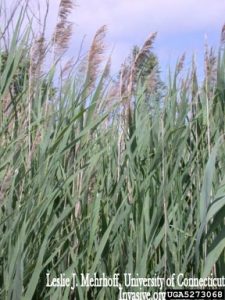 Common reed, or Phragmites, is a tall, perennial grass that can grow to over 15 feet in height. In North America, both native Phragmites (Phragmites australis ssp. americanus Saltonstall, P.M. Peterson & Soreng) and introduced subspecies are found. Introduced Phragmites forms dense stands which include both live stems and standing dead stems from the previous year’s growth. Its leaves are elongate and typically 1-1.5 inches wide at their widest point. Flowers form bushy panicles in late July and August and are usually purple or golden in color. As seeds mature, the panicles begin to look “fluffy” due to the hairs on the seeds and they take on a grey sheen. Below ground, Phragmites forms a dense network of roots and rhizomes which can go down several feet in depth. The plant spreads horizontally by sending out rhizome runners which can grow as much as 10 or more feet in a single growing season.

None; the height, growth density, and big plume inflorescences of Phragmites are very distinctive.

Phragmites can quickly take over a marsh community, crowding out native plants, changing marsh hydrology, altering wildlife habitat, and increasing fire potential. Its high biomass blocks light to other plants and occupies all the growing space belowground so plant communities can turn into a Phragmites monoculture very quickly.

Fossil records indicate that native strains of Phragmites have been present in North America for thousands of years.

Introduced Phragmites is thought to have arrived in North America accidentally, most likely in ballast material in the late 18th or early 19th centuries. It established itself along the Atlantic coast and over the course of the 20th century, spread across the continent. In Europe, Phragmites is grown commercially and is used for thatching, fodder for livestock, and cellulose production. It is also declining in parts of Europe which has been of concern to natural resource managers there. Here in the United States it is not used for many purposes.

Phragmites occurs throughout the lower 48 states and southern Canada.

Because Phragmites is mostly a problem of natural wetland areas, the most logical replacement plant is broad-leaved cattail (Typha latifolia).

Each Phragmites plant may produce thousands of seeds annually. Dispersal to new sites is typically by seed except along rivers and shorelines where fragments of rhizomes may be washed down to new sites where they can become established. Along roadsides, rhizomes fragments may also be transported by heavy machinery between sites.

Control with herbicides is effective for controlling areas with large, established, populations of Phragmites. Other options include mowing and prescribed burning.

Control of Phragmites is difficult. Repeated cutting can slow its growth and possibly hinder its spread, but will not eliminate it altogether. The best method to eliminate Phragmites is the foliar application of a systemic herbicide when the plants are actively growing.

Biological
At this time no means of biological control is available for treating Phragmites infestations.

Manual and Mechanical
Cutting or pulling has been used successfully to control Phragmites. Treatments usually need to be repeated annually. The best time to cut Phragmites is at the end of July. Cutting at other times may increase stand density. Phragmites stems should be cut below the lowest leaf, leaving a 6″ or shorter stump. Hand-pulling is an effective technique for controlling Phragmites in small areas with sandy soils.

Repeated mowing is effective at slowing the spread of established stands but is unlikely to kill the plant. Excavation of sediments may also be effective, but root fragments left in the soil may lead to reestablishment.

Prescribed burning after the plant has flowered, either alone or in combination with herbicide treatment, is also effective. Burning after herbicide treatment also reduces standing dead stem and litter biomass which may help to encourage germination of native plants in the following growing season. Do not burn plants in the spring or summer before flowering as this may stimulate growth.

Chemical
Glyphosate-based herbicides (such as Rodeo®) are effective in controlling established populations. If a population can be controlled soon after it has established the chances of eliminating the infestation are much higher because the below-ground rhizome network will not be as extensive.

Herbicides are best applied in late summer/early fall after the plant has flowered either as a cut stem treatment or as a foliar spray. Repeat treatments are required for several years to prevent any surviving rhizomes from resprouting.

Saltonstall, K. 2002. Cryptic invasion of a non-native genotype of the common reed, Phragmites australis, into North America. Proceedings of the National Academy of Sciences USA 99(4): 2445-2449.