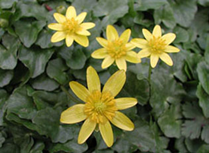 Fig buttercup, also called lesser celandine, is a low perennial herb that grows from tuberous roots. Most plants are no more than 6 inches tall, although some reach 1 foot. The shiny leaves are dark green, often paler on their undersides. Leaves have long petioles and may be oblong, triangular, or heart-shaped, with smooth or wavy edges; they may be as much as 1 1/2 inches wide. The yellow flowers appear in early spring, held above the leaves on slender stalks. Flowers are about 1 inch wide, with 7–13 yellow petals and 3–4 pale green sepals. The fruit is a cluster of hard achenes, each holding a single seed. Fig buttercup is a spring-flowering ephemeral that dies back after setting seed, completely disappearing by mid-June.

Fig buttercup reproduces vegetatively by means of its numerous underground tubers and the small, cream-colored bulblets that grow at the base of its leaves.Tubers and bulbets are easily spread by flooding; they may also be dislodged by digging animals or human activities. It may also be dispersed by seeds.

Fig buttercup emerges in early spring before most native wildflowers, giving it a competitive advantage over native ephemerals. It also spreads rapidly, forming a dense layer that crowds out native understory plants.

Originally from Europe, fig buttercup was introduced as an ornamental. It is now found in most of the northeastern United States and the Pacific Northwest. In New England it is found in Connecticut, Rhode Island, Massachusetts, and New Hampshire.