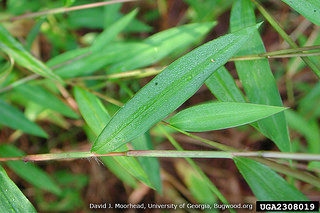 Japanese stiltgrass, native to East Asia, is an annual grass that can grow 5-6 feet in length, but the arching stems make it appear shorter. The name “stiltgrass” comes from the weak, prop-like roots which pull easily out of the ground. The 3” lance-shaped leaves are limy-green and taper at both ends. Their upper surface has a silvery, translucent stripe along the midrib. In late summer, the stems produce flowers on narrow panicles that just surmount the uppermost leaves. In early fall, flowers develop into small fruits about 0.1 inch long. By mid-fall, the stems turn purplish—this is when the plant is most recognizable. Japanese stiltgrass invades moist woodlands, floodplains and stream corridors, wetland margins, fields, thickets, ditches, and utility corridors. It can tolerate a variety of light conditions from full sun to deep shade.

The seed sticks to animal fur, clothing, boots, tires, and other surfaces which spread it around. Wind and water currents also spread the seed. During the growing season, sprawling stems root at the nodes, sending up new shoots.

Whitegrass (Leersia virginica) is a native grass that resembles Japanese stiltgrass. Whitegrass is deeper green; lacks the silver stripe on the upper midrib of the leaves; and has a tougher root system with small nodules on root filaments (Japanese stiltgrass lacks these nodules).

Japanese stiltgrass can dominate the forest floor of woodlands, wetlands, and floodplains, forming extensive patches that exclude other herbaceous growth. It has no value as a forage plant for wildlife. 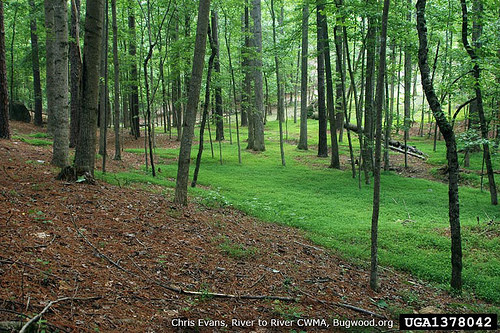 Japanese stiltgrass has spread into most of the eastern and Midwestern states. It is abundant in Connecticut and present in Rhode Island. First reported in Massachusetts in 1998, it now infests about 40 towns from Nantucket to the Berkshires.